Insights and inspiration to build a more equitable future.

Lead Young: A Framework for Navigating a World of Change

Quick Summary:
In today’s world, change is the new norm. But young people are not being equipped with the tools to thrive in a society of disruption and innovation. Our education system and much of our incentive structures for raising children are built around the world of the past: hierarchy, rules, and repetition. This issue of Social Innovations Journal provides a different lens for growing up today. Drawn from Ashoka’s network of leading social entrepreneurs, business entrepreneurs, and youth changemakers, the stories featured in this edition highlight what it looks like when young people know they are powerful by creating and leading something for the good of all, and why we should make leading young the new norm for growing up.

In the past, learning a set of skills like a vocation or profession, repeating them and following a set of rules was enough to be “successful” but today’s world demands something different. Change at a rapid pace is now the norm which can be either empowering and invigorating or disruptive and threatening depending on how prepared one is to deal with it. As Sir Ken Robinson and others have said, most of the jobs our young people will take don’t even exist today. Yet, our education system and incentives for growing up are outdated and becoming increasingly obsolete because they focus on acquiring an expertise and repeating it. 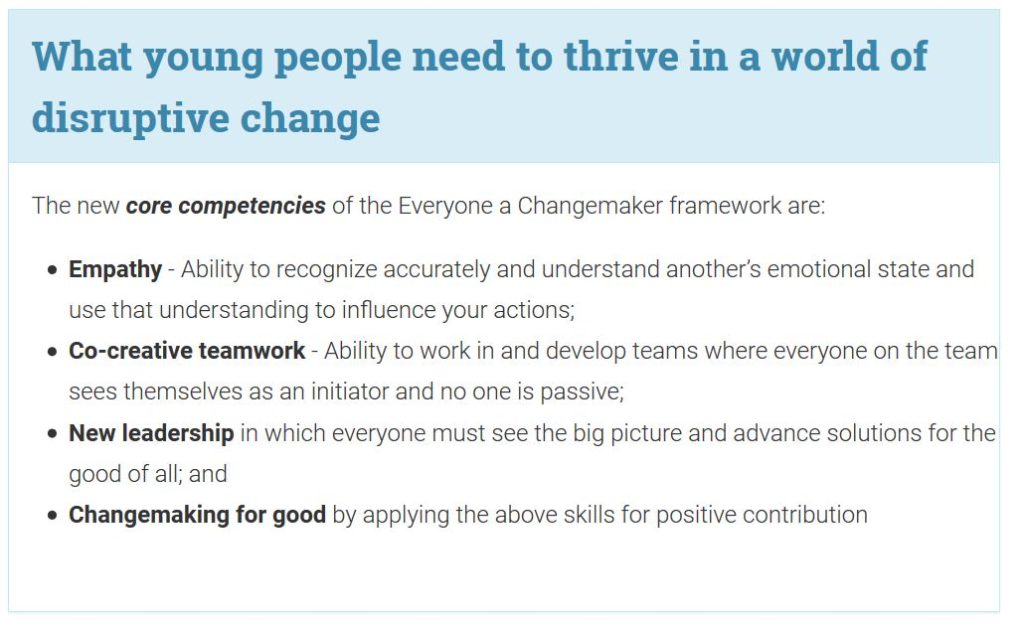 So, what is the new framework to navigate and thrive in this new reality?  While math and reading are still core skills, there are four competencies that become critical.  First, there is a premium on those who have mastered cognitive empathy and are in tune with the people around them and can adjust their own behavior and actions to respond accordingly.  Second, with this empathy comes the ability to work in teams where everyone contributes meaningfully and productively.  In this kind of teamwork, a new kind of leadership — the third competency — is valued, one where strong leaders empower all to lead rather than command others to follow.  These three skills of empathy, teamwork, and multidimensional leadership lead to the fourth critical skill of changemaking which is creating one’s own solution to a problem for the good of all.

Get the full story and the inspiring snapshots of youth leadership in the July 2017 edition of Ashoka’s Social Innovations Journal.