“Citizen-Centric Advocacy: The Untapped Power of Constituent Engagement,” reveals the degree of influence that citizens have on congressional decision-making. The report is the most comprehensive research ever published on citizen engagement with Congress. 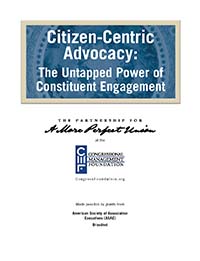 The research answers critical questions for citizen-advocates and lobbyists, including the following:

How influential are constituent meetings compared to lobbyist meetings?

What is the most effective way to communicate with a lawmaker (letter, email, phone call)?

Which methods/strategies are most successful for building long-term relationships with Congress?

The findings are based on nine surveys of congressional staff, comprising nearly 1,200 responses provided to CMF from 2004-2015. The research also includes a new case study with food bank representatives (part of the Feeding America network) and how they utilized advanced citizen-advocacy techniques to build relationships with their legislators.

This research is part of CMF’s Partnership for a More Perfect Union, a program to help citizens have better communications, understanding, and relationships with Members of Congress. If your organization is a member of the Partnership, please click here to log in and download the report.

This piece was originally published in May, 2017 on the Congressional Management Foundation’s Communicating with Congress project as Report – Citizen-Centric Advocacy: The Untapped Power of Constituent Engagement.

For more information on Communicating with Congress project or the resources we provide to citizens, visit our Citizen Engagement page. For more information on the resources and services we provide to congressional offices, visit our Congressional Operations page. The report was sponsored by the American Society of Association Executives (ASAE) and Broadnet.